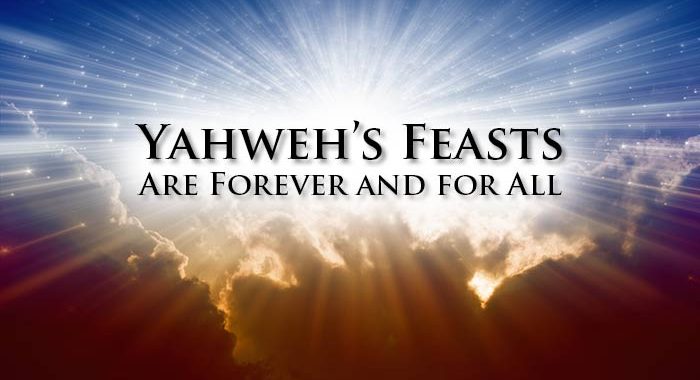 What is Yahweh’s annual feasts or festivals?  Most professing Christians observe what they call the “Lord’s Supper”, “Holy Communion”, “Mass”, “Eucharist”, or some such observance involving the partaking of bread and wine that symbolise Messiah’s sacrifice.  Few even begin to understand why they are doing this as there are several different types of observances involved when one considers the different branches of ‘Christendom’.

Yahweh’s Annual Feasts are His appointed holy days that His people mark to commemorate specific event that signpost their SALVATION goal.  There are seven basic feasts, which have Sabbath rests in some of them. The first is Passover. Passover has no Sabbath rest in it.  The mainstream Churches DO NOT celebrate PASSOVER Yahshua commanded, rather they celebrate Easter, which is a Pagan festival of goddess of sex and fertility of ancient Middle East – known as ‘Ishtar’ or ‘Isis’. Yahweh forewarned: “Do NOT inquire after their gods, saying ‘How did these nations serve their gods?  I also will do likewise.’  You shall NOT worship Yahweh your Elohim in that way…” Deuteronomy 12:30-31. Yahshua called all man-made festivals “tradition of men” or “commandments of men” (Mark 7:6-9,13).  He warned His Church against following such human traditions. What then is Yahweh’s Master Plan or purpose for His Holy Days, namely: Passover, Unleavened Bread, Pentecost, Trumpets, Atonement, Tabernacles, Last Great Day? These seven Festivals were given to us as a way of teaching and informing us about Yahweh’s Master Plan of our salvation and redemption into His kingdom, which mankind lost by way of sin.

Unfortunately, most professing Christians ‘Easter’ instead of Passover. Easter is not Yahweh’s appointed feast but heathen practice. They do not observe other important festivals of Yahweh as commanded by Him!  Throughout the Bible, many of the things Yahweh does are revealed in patterns of SEVEN.  For in the beginning, Elohim created the seven-day week (Genesis 1).  The seventh day was revealed to be His Holy Sabbath (Gen.2:1-3; Exodus 20:8-11; 31:13-17). Later He gave exactly seven annual Holy Days to reveal His overall plan and purpose in dealing with humanity (Leviticus 23).  In the New Testament, we find the seven Churches of Revelation described (Revelation 2-3).  We read of the seven seals, the seven trumpets, the seven last plagues, etc.  So it is not surprising that His Plan is revealed in seven steps.  For seven is the biblical number of completion or perfection. Therefore, when we understand, it should seem ridiculous to observe just one of Yahweh’s annual Festivals picturing His Plan and omit all the others!

What is the purpose of these Festivals? 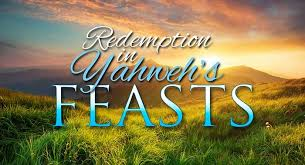 “Feast of Passover“ – is a solemn observance of Messiah’s suffering and death on our behalf. It pictures our acceptance of Messiah’s broken body and shed blood for remission of our sins, which He offered to us as our Saviour and Deliverer. The BLOOD of Yahshua sets believers in Him free from the power and clutches of SIN.  This is just the first step.  The next, “Feast of Unleavened Bread“, teach us to grow in grace and knowledge of Messiah (2 Peter 3:18) and to begin to put our old sinful ways and habits completely out of our lives.  This “overcoming” process is pictured by the seven Days of Unleavened Bread festival. Third, “Feast of Pentecost“, all of us together in the spirit-begotten Church – the “little flock” (Luke 12:32) – are only the “firstfruits” of the great spiritual harvest that will occur after Messiah’s Second Coming.  So Yahweh’s third annual Festival, the Feast of Pentecost or Feast of “Firstfruits” pictures the fact that only a very small spiritual harvest is being reaped by Yahweh at this time (many are called but few are chosen).

The last four depicts – End-Time Events pictured in the Seventh Month. Therefore, the fourth: “Feast of Trumpets“ (Leviticus 23:24), was literally used in ancient Israel to call attention or blow alarm of war; also it marks coronation of king.  In our day, at the climax of a series of wars and worldwide upheavals, Yahshua Messiah will return as King of kings and the dead will be raised “at the last trumpet” (1 Corinthians 15:51-52). At this time, a trumpet of Yahweh will be sounded that will usher resurrection of the dead-in-Messiah, followed by the living that will join them in the air to meet with the Master.  Then, immediately after Messiah’s return, Satan will be supernaturally bounded and put into the bottomless pit “so that he should deceive the nations no more” (Revelation 20:3).  Finally, with Satan bound, man can become “at one” with Yahweh.  This is clearly pictured by the fifth spiritual Festival, called the “Day of Atonement“.  After Messiah’s return, Yahweh pours out His Spirit and begins to enlighten humanity with the true understanding of His great plan. This He will do using His “first-fruits” who overcame, and who would be reigning with HIM from Jerusalem [World Capital City]. The “first-fruits” will be teaching and enlightening confused and deceived mankind.  At that time, Yahweh says, “The earth shall be full of the knowledge of YAHWEH as the waters cover the sea” (Isaiah 11:9).  This is pictured by our joyous observance of the sixth Festival in Yahweh’s Plan – the seven-day “Feast of Tabernacles“ or “Feast of Ingathering“ (Exodus 34:22).  This feast heralds and teaches period of mass harvest of souls.  Confused and deceived mankind will come to true knowledge of truth and shall receive the gospel message.

Now, comes the seventh and final spiritual Festival Yahweh gave His people. “But what part of His plan could still be left to picture?” you might ask.  As shown earlier, even at the end of Messiah’s 1,000-year reign, there will be the untold billions of people of past ages who never understood virtually anything about the true Yahweh, about Yahshua Messiah or about Yahweh’s purpose for their lives.  What will happen to these “unsaved” billions of human beings since “there is no partiality with Yahweh?”  (Romans 2:11).

The solemn seventh Festival of Yahweh pictures the time when Yahweh will – for the first time – open their minds to understand His word and His will and give them a genuine opportunity to have their names written in the “Book of Life” (Revelation 20:11-12).  With the observance of this seventh Festival that we call the “Last Great Day” (John 7:37), we finish the portrayal of the entire PLAN of our Creator.  From our first acceptance of Messiah as Saviour to the picturing of His Second Coming all the way until the Last Great Day picturing the time when ‘other’ obedient human beings will finally have a real opportunity for salvation. These Yahweh-given, Yahweh-inspired Festivals picture the REAL Plan of God.  The pagan religious festivals that Satan has foisted off on a deceived humanity are indeed a cheap substitute.  For, in reality, they picture a false god, a false Messiah and lead to the acceptance of a false gospel, which directly contradicts the message that MESSIAH and the Apostles preached!

Out of the seven Festivals, two last seven days, and five last one day each, thus making 19 annual Feast days each year.  Seven of these 19 days are special rest days or “Annual Sabbaths.”  These seven annual Sabbaths are also known as Yahweh’s Annual Holy Days – as contain in Leviticus 23.  Notice the biblical passages:

The above is just brief sketch of what Yahweh’s Master Plan for us depicts, and they are memorial feasts or festivals commanded to be celebrated from generations to generations, even forever.  Like the Samaritan woman Yahshua met and instructed: “You worship what you do not know; we know what we worship, for salvation is of the Jews” (John 4:22), most of the mainstream Christendom are just in position of the Samaritan woman who do not know what they worship. They have rejected the teaching of Yahshua Messiah, or overlaid it with human traditions. The Jewish people did preserve the knowledge of the Creator Yahweh and the only written Bible available to the original New Testament Believers was the Old Testament (OT).  Clearly, the Jews were given the “oracles of Yahweh” (Romans 3:1-2), which certainly included Yahweh’s Holy Days and the understanding of how to construct the sacred calendar upon which those days are based. So the Jews did “know” whom they worshipped.  And through Messiah and a correct understanding of the OT, salvation was “of the Jews”.  In spite of human weakness and man-made tradition, the Jews have preserved Yahweh’s spiritual LAW, THE TEN COMMANDMENTS, the true SABBATH, and the ANNUAL HOLY DAYS that the Creator has commanded.  And out of the Jewish race came Yahshua Messiah – the prophesied Messiah. Yahshua celebrated all these feasts during His Earthly Ministry, some of which are recorded in John chapters 7 and 8).  The Apostles also kept all the Feasts, including Paul and others, thus setting example for people of Yahweh to follow.

The Apostle Paul was inspired to write: “For he is not a Jew who is one outwardly, nor is circumcision that which is outward in the flesh; but he is a Jew who is one inwardly; and circumcision is that of the heart, in the Spirit, and not in the letter; whose praise is not from men but from Yahweh” (Romans 2:28:29, RSB).  So all true Disciples [Followers of Yahshua] are spiritual “Jews”!  And we are bound to keep the spiritual laws and Holy Days that Yahweh gave Israel, and that were reaffirmed by the example of Messiah and the inspired New Testament Congregation.

As Paul wrote: “For in Messiah Yahshua neither circumcision nor uncircumcision avails anything, but a new creation. And as many as walk according to this rule, peace and mercy be upon them, and upon the Israel of Yahweh” (Galatians 6:15-16, RSB).  Clearly, as many as walk (obey) Yahweh’s commandments, they are the true “Israel of Yahweh”; they are the true people of Yahweh; they are those who are spiritually circumcised and have Messiah living His obedient life in them through the Holy Spirit.  They are the true Assembly promised by Messiah that – “Because thou hast kept the word of my patience, I also will keep thee from the hour of temptation, which shall come upon all the world, to try them that dwell upon the earth” (Revelation 3:10). They kept His patience, i.e. is were obedient and kept His word, His statutes, His commandments, therefore, they are the true servants, and He would keep them save during great tribulation.  So, yes, we must get rid of our prejudices and quit calling “Jewish” those things Yahweh gave for all His people of all races and all nations!

True Disciples or Believers are to keep holy the days Yahweh made holy, beginning from WEEKLY SABBATHS (seventh day Sabbath) to Annual Holy Feasts.  We must follow the example of Yahshua Messiah and the original Apostles in so doing.  Then, observance of Yahweh’s Holy Days will open our minds to the great PLAN and PURPOSE that Yahweh is working out here on Earth.  Indeed, Yahweh does have a great plan in mind for all humanity.  Yahweh reveals this to us through Paul’s letter to the Ephesians: “Having made known to us the mystery of His will, according to His good pleasure which he purposed in Himself, that in the dispensation of the fullness of the times He might gather together in one all things in Messiah, both which are in heaven and which are on earth – in Him, in whom also we have obtained an inheritance, being predestined according to the purpose of Him who works all things according to the counsel of His will” (Ephesians 1:9-11; also see Revelation 22:3-4; 21:3).

Be blessed as you obey YAHSHUA in keeping and observing His holy commandments!